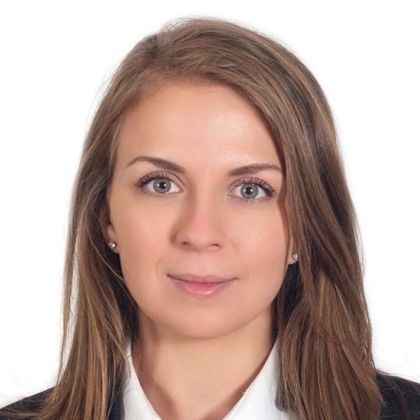 Maria Harizanova is an Attorney-at-law in CMS Sofia, who besides Employment and Data Protection Law, is also experienced in Energy Law. She advises local and international clients from the energy sector on various regulatory matters related to the development and operation of their businesses, construction and licensing of renewable energy plants, permit regimes, renewable energy trends, energy efficiency contracts, etc. Her most recent work has focused on ESG-related issues, such as local environmental issues, pollution and waste, natural resources and climate change.

• Advising one of the leading energy services companies on the relevant regulatory framework for energy efficiency contracts and their tax treatment under Bulgarian law.
• Advising the Bulgarian subsidiary of an international energy trader, and the largest producer of renewable energy in Switzerland, in relation to its day-to-day operations.
• As per request of a foreign Bar Association, preparation of the regulatory framework of the renewable sector in Bulgaria with special focus on mitigating climate change, grid-modernization, public private partnerships, prices, fossil fuels and general trends in the sector.
• Drafting a market report for the 4th largest Bank in Bulgaria, related to the renewable energy sector in Bulgaria, including a general market overview on the Energy Sector, RES Market Overview with focus on PVs and Wind PP & RES Trends, Regulatory Development, electricity prices of RES – forecasts and assumptions about min & max range of prices in the short-mid-long term, analysis of a typical CAPEX and OPEX for RES projects, conclusion on Risks and Mitigating factors

END_OF_DOCUMENT_TOKEN_TO_BE_REPLACED

• Advising a leading Bulgarian telecommunications company, on its day-to-day operations, including data protection.
• Advising a big governmental organisation on the rights of individuals to seek redress for violations of intelligence laws.
• Advising a global fashion retailer on various data protection matters, including the standardization and alignment with
• Bulgarian law of its data processing agreement; data protection policy regarding the launching of a promotional initiative for children; the preparation of a Booking.com-offer in view of GDPR, as well as the creation of its loyalty programme in terms of compliance with GDPR and applicable security standards.
• Advising the foreign investor on data protection issues with regard to the potential acquisition of debt collection companies.
• Advising the largest Bulgarian Bank on data protection issues with regard to the sale of a corporate non-performing loan (NPL) portfolio.
• Legal support on the GDPR compliance of a local shopping centre and a local business centre.

END_OF_DOCUMENT_TOKEN_TO_BE_REPLACED

Maria Harizanova is an attorney-at-law with the CMS office in Sofia, Bulgaria, where she co-heads the CMS Sofia Employment law department. She also specializes in Data Protection with a focus on employee Data Protection and Energy Law. Maria received her law degree from the Plovdiv University “Paisii Hilendarski” and obtained an LL.M. in American Law with a focus on business and corporate matters from Boston University.

Maria joined CMS Sofia in 2017, having previously gained experience, during several internships, at law firms abroad (United States and Portugal) as well as at the United Nations Headquarters. She is admitted to the Bulgarian Bar Association and has a pending New York Bar Association admission. Maria speaks Bulgarian and English.

Her main area of expertise is Employment Law, and in this capacity, she advises local and international clients from many sectors on all Employment Law issues, such as works councils’ co-determination rights at national or individual company level, compliance (including remuneration) with national laws and standards, misconduct and discrimination, individual and collective dismissals and severance agreements, the EU's General Data Protection Regulation (GDPR), new forms of employment and ways of working, employee stock ownership schemes and pension schemes, wage taxes, fringe benefits, social security matters, expat regulations and cross-border secondments, dispute resolution, litigation and mediation for employment and pensions matters, including labour law and trade union issues and disputes, employee competition and confidentiality, employment contracts, policies, and collective agreements. Maria’s most recent focus has been on ESG-related issues, such as human rights, whistleblowing, supply and chain labour standards, human capital, etc.

END_OF_DOCUMENT_TOKEN_TO_BE_REPLACED

CMS Next
Fu­ture of Work
Show all