Germany takes the number one spot in the 2019 Infrastructure Index. The country’s move to the top of the rankings is attributed to its spike in sustainability and innovation – an increase of almost 8% from 2017 – as well an improvement in ease of doing business. Energiewende, the landmark political project that made climate action part of the German national identity, is ready for its next chapter. 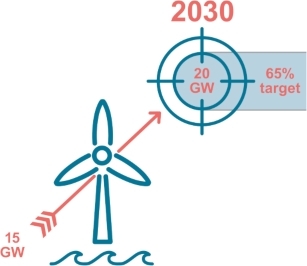 Offshore wind will play a central role in reviving the country’s renewables expansion and help reach a target for 65% of renewable electricity by 2030. The German government is expected to upscale its offshore wind target from 15GW by 2030 to 20GW, boosting a market that is already the EU’s second largest after the UK.

Two auctions took place in 2017 and 2018, awarding more than 2.5GW of total capacity, some of which at zero-subsidy bids. The winning projects are now in the market looking for financing. German utility Innogy is looking to raise approximately EUR 600m in debt for its 325MW Kaskasi project.

Grid for the future

In August 2019, Germany’s Federal Network Agency proposed the construction of a fourth electricity highway to transfer the wind energy produced in the north to the industry-packed southern part of the country. The much-needed transmission lines are designed to balance existing production with consumption and enable further capacity.

Energy storage is an integral part of how the country plans to efficiently manage existing and upcoming capacity. Utilities all over the country are incorporating storage into their operations, tapping into the available revenue streams and cost-saving services. In May 2019, Enel Green Power inaugurated its 22MW Cremzow battery storage plant co-located next to energy company Enertrag’s wind power plants in northern Germany.

The country’s residential storage sector is also thriving, with more than 100,000 storage systems installed by the end of 2018. At the beginning of 2019, energy storage start-up sonnen, which was acquired by Shell in February 2019, created a virtual battery using residential storage installations and generates revenue from the Primary Control Reserve (PCR) market, the country’s main frequency regulation service. 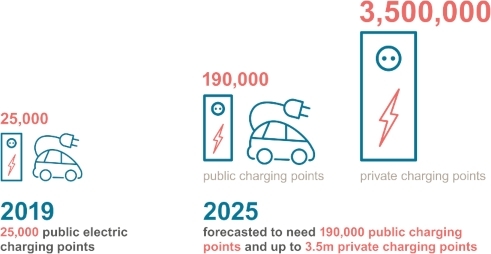 Germany is fast becoming a global powerhouse in electric vehicle charging infrastructure and innovation. By the end of 2018, the country held a 177,000 electric and plug-in hybrid car stock, Europe’s third largest after Norway and the UK, and more than 25,000 publicly available EV charging points, only second to the Netherlands in the EU. The National Platform for Electric Mobility, a Government advisory council, forecasts the country will need 2.4 to 3.5m private charging points and up to 190,000 public ones by 2025.

Global and local market leaders are aiming to secure market share in the country’s booming market. Vattenfall, Shell and ABB are some of the international players competing with a strong domestic presence, such as Innogy, EnBW and Ionity, a Munich-based JV between major car manufacturers BMW, Daimler, Ford and Volkswagen.

Investment in traditional infrastructure has been steady, with money coming in from both the public and private sectors. This is due to a series of competitive road tenders being run in 2019.  Successful rail concessions, such as the EUR 389 million Augsburger Netze where sponsor Amomare Vermietungsgesellschaft raised debt from NordLB, Helaba and BayernLB, have also recently concluded. In July 2019, Germany’s federal government, alongside railway company Deutsche Bahn, announced an investment plan of EUR 86.2bn in rail infrastructure between 2020-2029 which should continue to keep deal flow steady.

In May 2019, Austria's Strabag and France's Vinci were shortlisted for the EUR 670m A49 motorway PPP. The next motorway PPP planned by project authority DEGES is the B247 project in central Germany. The project is an expansion of a 24.4km motorway, along with the construction of 31 bridges. Nonetheless, due to increased competition and relative scarcity of projects, bid prices are expected to be squeezed.

On the other hand, public social infrastructure spending is declining despite social needs being on the rise. For example, by 2018 the ageing population of Germany had increased by 30% since 2000. It is expected that private capital will play a more active role in the infrastructure sector, although project financing opportunities are still limited.

The allure of Germany