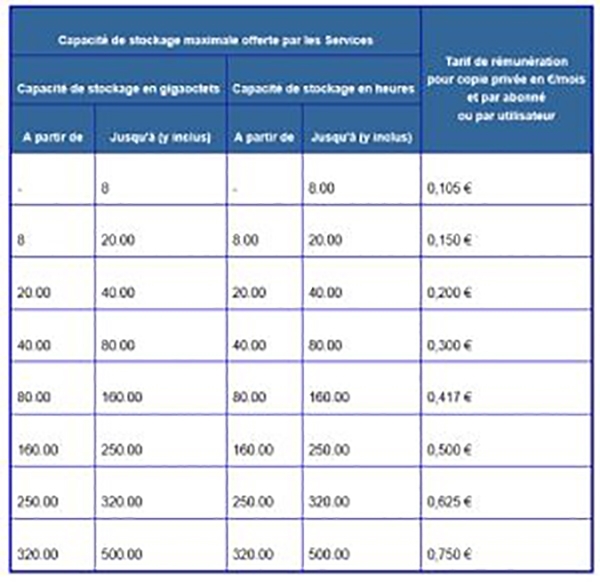 This exception allows consumers to obtain a reproduction of a radio or television programme, before or during its broadcast for the remaining part of the programme, in a private digital space, without having to obtain permission from that programme's copyright holders but in return for payment of a royalty to them.

The provisions covers all "nPVR” (network personal video recorder), defined as “magnétoscopes numériques” by French guidelines. However it excludes "VOD" (video on demand) services and “TV catch-up" services, offering consumers remote access to a catalogue of programmes pre-selected by the producer, without enabling them to make a copy in a private space.

Based on those criteria, the commission for the remuneration of private copies defined the royalty schedules applicable to nPVR services in a decision dated 19 June 2017: 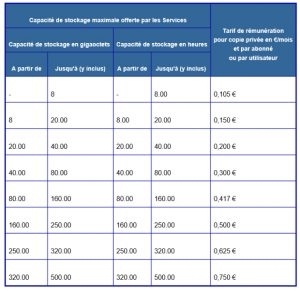 In practice, those royalties will be paid by nPVR service providers (programme producers or distributors) to royalties collection and distribution agencies. The sums paid by providers will of course ultimately be passed on to the end-users of nPVR services.

As indicated in the commission's decision, nPVR service providers will have to send declarations to the collection agencies, stipulating "the distinct number of users or subscribers with access to those services according to the recording capacity provided to them", by the 20th of each month for the previous month. They will then be required to pay the royalties within 40 full days from the end of the month in which the nPVR services were made available to each user or subscriber.

Since the decision was taken without any impact study, the above-mentioned schedules were defined on a provisional basis, for a maximum period of one year, when the definitive schedule will come into force.

It should be noted that, whereas the French private copy exception concerning nPVR services is now well defined, it may soon be invalidated.

Indeed, several right-holders consider that this new private copy exception does not meet the “three steps” test under EU law, since:

It is interesting in this respect to note that the Turin court in Italy recently asked the Court of Justice of the European Union whether "a national provision “which allow a commercial undertaking to provide private individuals with cloud computing services for the remote video recording of private copies of works protected by copyright, even where the active involvement of that commercial undertaking in the recording is entailed, and even without the rightholder’s consent , against a flat-rate compensation in favour of the rightholder, in essence subjecting the services to a compulsory licensing system” is compatible with EU law (case C-265/16, VCAST Limited v. R.T.I. SpA).On 29 November 2017, the European Court of Justice answered that: “Directive 2001/29/EC of the European Parliament and of the Council of 22 May 2001 on the harmonisation of certain aspects of copyright and related rights in the information society, in particular Article 5(2)(b) thereof, must be interpreted as precluding national legislation which permits a commercial undertaking to provide private individuals with a cloud service for the remote recording of private copies of works protected by copyright, by means of a computer system, by actively involving itself in the recording, without the rightholder’s consent”.

Therefore, we consider that this decision could be used to argue that the French private copying exception related to nPVR services is invalid as contrary to the EU law. However, this should be of course clarified by French Courts or French legislator.