The District Court of Amsterdam held, in its 9 August 2017 decision, that video game company Riot Games infringed the image rights of soccer star Edgar Davids in its game ‘League of Legends’.

League of Legends is one of the most played video games globally, with more than 67 million people playing the game per month and more than 43 million views for its annual World Championship (more views than the NBA Finals).

In its online League of Legends game, Riot Games introduced a 'striker' skin that converted the 'Champion Lucian' avatar into 'Striker Lucian'. With this skin applied, Striker Lucian - who has a broad jaw, dreadlocks and black, angular goggles - looks very similar to Edgar Davids, the retired soccer player. Due to this strong resemblance, and the fact that both are football players, Edgar Davids claimed infringement of his image rights under Dutch copyright law.

The court held that the combination of these elements (dreadlocks, goggles, dark skin color, sporty posture, aggressive play style, and football uniform) caused the public to identify 'Striker Lucian' as Edgar Davids. In supporting this conclusion, the court referred to the many social media messages from players and others commenting on the similar appearance. The court also relied on evidence that a Riot Games employee confirmed in a tweet that Davids was the inspiration for the skin. 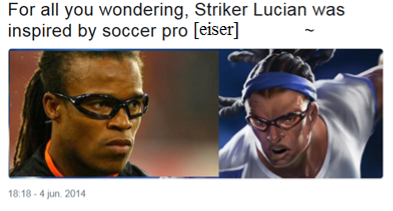 Public figures, including soccer players like Johan Cruijf and Marco van Basten, have previously brought claims in the Netherlands for infringement of their image rights. However, their claims involved use of their images in offline contexts.

The District Court of Amsterdam’s ruling in this case shows that image rights cases involving public figures, in both on and off line use, will be strictly enforced in the Netherlands.

CMS Next
On the Pulse
Show all