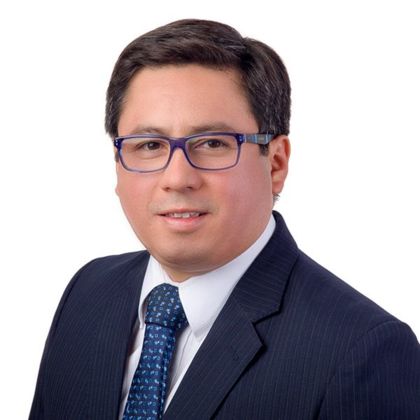 He is a lawyer with 20 years of experience in Legal Management of public and private entities. He has master's degrees completed at the Pontificia Universidad Católica del Perú, postgraduate studies at the University of Salamanca - Spain, training in national and international executive management programs and specialization in Legal Administration from the Yale School of Management. He also has public and private practice in Bankruptcy Law.

Former General Representative of INDECOPI and member of different Commissions of that Institution with competence in Bankruptcy, Elimination of Bureaucratic Barriers and Consumer Protection, charges that they occupied in parallel way for 13 years.

He advised the Bankruptcy Administrations in charge of the process of Settlement of Doe Run Perú (company of the mining and metallurgical sector with liabilities in excess of US $ 600 MM), being charged of the Legal Management of that company during 5 years. In this position he contributed to reduce the number of legal contingencies of the company and collaborated with its legal and environmental sanitation.

Former Vocal of the Court of Dispute Settlement of Osinergmin, position in which was appointed by Supreme Resolution and that occupied during 4 years. In this position, it resolved together with the other members of this collegiate body, several companies between operators of the electric sector.

He has been an exhibitor at academic symposiums related to Bankruptcy Law and Consumer Protection, as well as a lecturer at the National School for the Defense of Competition and the Protection of Intellectual Property.

END_OF_DOCUMENT_TOKEN_TO_BE_REPLACED

Michelle Barclay as "Peru Law­yer of the Year" in the Cham­bers Wo­men in Law Awards: Lat­in Amer­ica 2018
CMS Grau in­cor­por­ates Juan José Hop­kins as a new part­ner with ex­pert­ise in Fintech and M&A
Show all
Find out how we can help you with your ESG needs