In a referendum held on 23 June 2016, the United Kingdom (UK) voted to leave the European Union. For a long time, the withdrawal agreement negotiated between the EU and the UK was not adopted by the British Parliament, could not come into force and thus the withdrawal deadline was deferred on several occasions.

On 31 January 2020 at midnight (CET), the UK left the EU. With that, the Withdrawal Agreement between the EU and the United Kingdom came into force.

Until the expiry of the transition period set out in the Withdrawal Agreement on 31 December 2020, the UK was still treated as a Member State. Since 1 January 2021, EU law has ceased to apply to the United Kingdom and the UK is no longer part of the internal market or customs union.

Following intense negotiations, the EU and UK reached an agreement on their future partnership on 24 December 2020. The Trade and Cooperation Agreement is provisionally applicable from 1 January 2021 until it is ratified.

Although the negotiating parties succeeded in reaching a trade and cooperation agreement, the relationship with the UK will be fundamentally different to membership of the EU internal market. As of 1 January 2021, there is now a customs border between the EU and the UK, and customs formalities must be observed.

Numerous further points are (as yet) unclear. We offer you comprehensive advice on the withdrawal of the UK from the EU in all legal areas concerned. Please contact us with your questions so that we can work out the best solutions for you.

Pod­cast - The Fu­ture after Brexit
CMS To Go
Brexit - the count­down to cus­toms and bor­der con­trols
The date has been post­poned on sev­er­al oc­ca­sions but now the day is here. The United King­dom will leave the EU on mid­night (CET) on 31 Janu­ary 2020. Trans­ition peri­od The trans­ition peri­od be­gins there­after...
Newsletter

Timeline: Brexit and other Events relevant to the European Union in this context 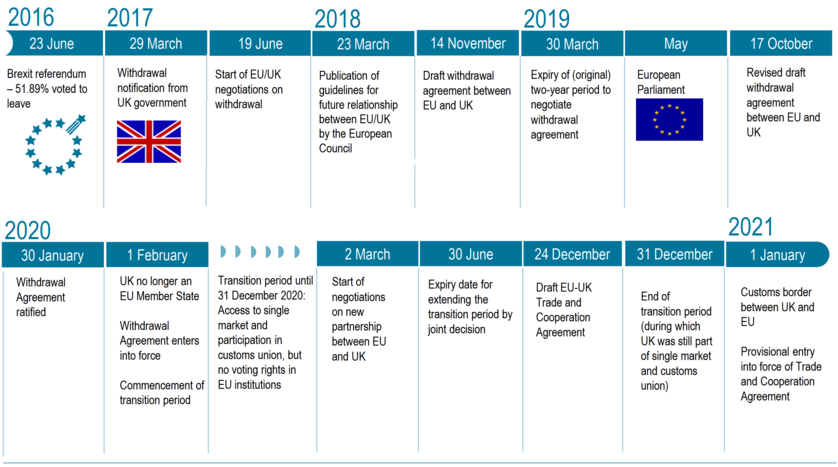 Please find below a summary of the possible legal consequences of the UK's withdrawal from the EU, arranged according to areas of law. If you require any further information please feel free to contact John Hammond at any time.

If you have any questions regarding the UK's withdrawal from the EU and its consequences, you can call our lawyers on the Brexit Hotline at any time: +49 711 9764 930.