On 27 March 2018 we published our interim sector analysis of the 2,000 or so employers that had, so far, reported on their gender pay gap. Now that the reporting deadline has passed and over 10,000 employers have reported, we take another look at the final position for 2017/2018 and what this means for employers.
As has been covered widely in the media, the reporting exercise has made abundantly clear that almost all sectors experience a significant mean gap in ordinary pay as well as bonus pay. The position has worsened since we reported our interim findings in March, perhaps understandably as many of the later reporting companies experienced larger pay gaps.

Most employers have explained that the differences arise due to the dominance of men in senior roles and women in more junior roles. Whilst this may be so, there are nevertheless significant employee relations, recruitment and PR challenges ahead for many businesses.

As previously, CMS has calculated the interquartile range (the midspread or middle 50%) for each of the sector categories identified for reporting purposes by the Government, for the mean ordinary pay gap and mean bonus pay gap. This range excludes the quarter of respondents with the biggest gender pay gaps and the quarter of respondents with the smallest gender pay gaps, to give a sense of where the “pack” is for a given sector. The below charts use all data as at 8 April 2018 on the Government viewing service, with the vertical line in each case showing the range across the group assessed, and the square marking the median point among them. 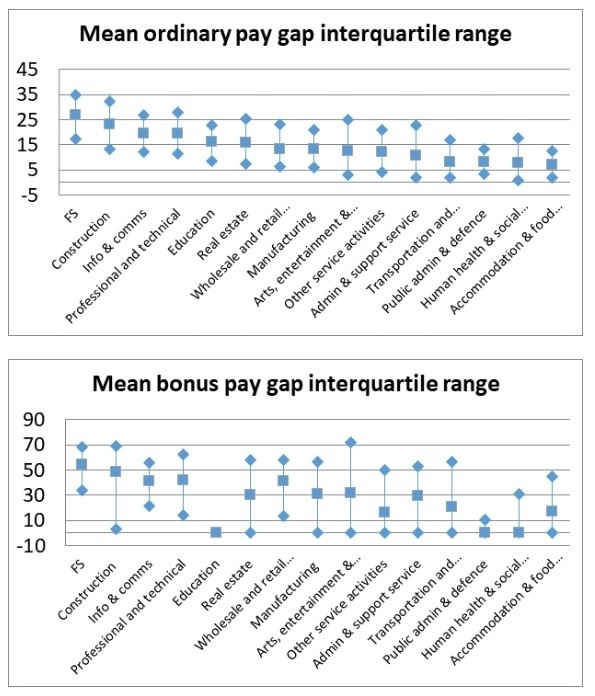 Note: Only sectors with more than 100 companies responding are included above; companies linked with multiple sectors have been included in each identified sector.

What does this data tell us?

The worst performing sectors remain Financial Services, Construction, Professional Services and Information and Communications. Interestingly, on the whole, the size of bonus pay gaps does not necessarily correlate to the size of ordinary pay gaps, with sectors such as Education, Public Administration and Defence and Human Health and Social Work showing a minimal bonus pay gap but (especially in the Education sector) a more sizeable ordinary pay gap.

Much media coverage of the Gender Pay Gap reporting obligations has focused on whether this data shows that employers have been acting illegally or, conversely, whether the results are simply not realistic since they do not show like-for-like comparisons between roles. Employers themselves will on the whole be aware that the existence of a gender pay gap does not necessarily mean that employees have equal pay claims, but this does not negate the need to consider making structural changes in recruitment, promotion and retention practices. Businesses are well advised to focus on why the roles in the “top quartile” have such low numbers of women and what long term changes can be implemented to improve this, as well as equalising the numbers of men and women in the lowest earning quartile.

How can you use this data?

Now that the first reporting deadline has passed, employers will inevitably be turning to next year’s report. We expect that the scrutiny will now shift to whether an organisation has improved the pay gap from the previous year, through demonstrable initiatives and results.

Our analysis may provide a valuable opportunity to benchmark whether your business fell this year within an average range for your sector, and give you something to work towards for the 2018/2019 reporting cycle.

If you would like any advice or assistance with your Gender Pay Gap reporting and the presentation and explanation of the figures, please contact us.

Mass Equal Pay Claims – Are You Next?
Mar­gin­al gains could be the key to gender pay
Show all