Interest in EVs has waxed and waned over the years, but the last ten years have seen a momentous surge in the market, which is set to transform the automotive industry.

However, there has been a slowdown in market growth rates in recent years which has been linked to the removal of government subsidies. Whilst it was expected that, in-line with all emerging markets, growth rates would ultimately inevitably decline, the EV market still seems a million miles away from the potential scale it could achieve, with EVs representing just 0.2% of the total number of PLDVs in circulation globally 2 As above in fn. 1 . 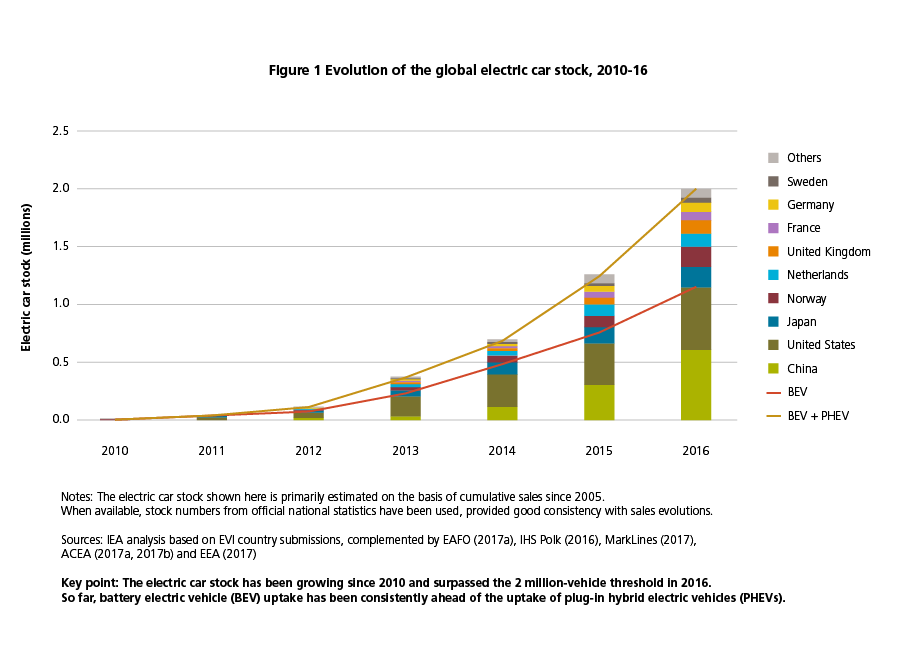 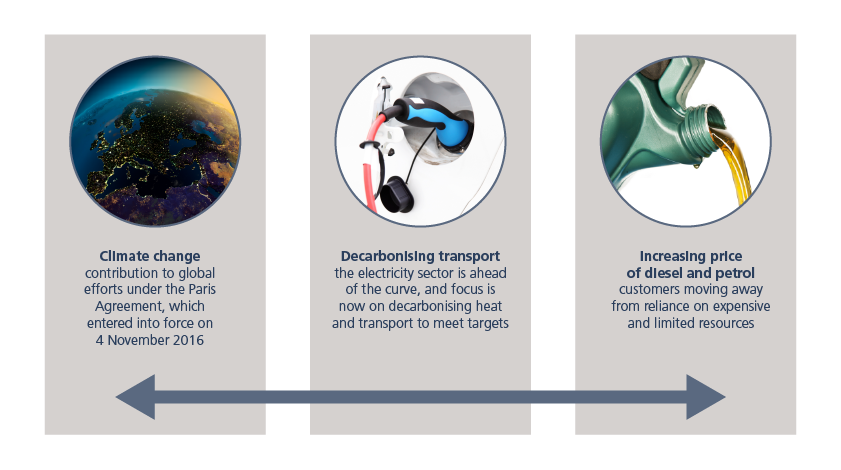 Global framework
Climate change is a significant driver in the development of EVs. The Paris Agreement, which came into force in November 2016, brings a large number of nations together in the pursuit of reducing greenhouse gas (“GHG”) emissions and limiting global warming to well below 2°C. The Agreement requires all parties to declare “nationally determined contributions” (“NDCs”), which embody efforts by each country to reduce national emissions and adapt to the impacts of climate change.

EVs have the potential to be instrumental in enabling countries to meet their NDC targets. Electric motors are more efficient than combustion engines and this, coupled with the transition to a lower-carbon electricity generation mix, is how EVs can contribute to the reduction of carbon emissions. The 2015 Paris Declaration on Electro-Mobility and Climate Change states that transport contributes to 23% of the current global energy-related GHG emissions and is growing faster than any other energy end-use sector. The IEA has estimated that EVs must represent 35% of new vehicle sales by 2035 to limit climate change to less than 2%. This is recognised and demonstrated in the EU’s transport-related measures outlined below, which have been put in place to help the EU achieve its NDC goals of reducing GHG emissions by 40% below 1990 levels by 2030 and 80% below 1990 levels by 2050 3 See the Commission Staff Working Paper at the link below for a detailed summary of the existing EU measures on sustainable transportation.
Comission Staff Working Document :

Local policy implications
This global-level ambition to reduce emissions has trickled down to national-level government policies and initiatives. These have ranged from:

China’s remarkable EV sales growth is largely attributable to promotional measures such as sizeable purchase subsidies, large-scale charging infrastructure funding and restrictions on registrations of combustion-engine vehicles. However, the market is already showing signs of over-reliance on subsidies, with a precipitous fall in sales linked to subsidy reductions in early 2017.

Demand for electric vehicles is increasing due to factors including the following:

Increasing affordability
At present, EVs are generally more expensive to purchase than their conventionally powered counterparts, but the gap is closing. In May 2017, the Financial Times (“FT”) reported on a UBS analysis that forecast cost parity between EVs and conventional gas and diesel vehicles as early as 2018 in Europe, by 2023 in China and by 2025 in the US. 9
Electric car costs forecast to hit parity with petrol vehicles In September 2017, the Bloomberg New Energy finance research that predicted “tumbling battery prices” would make EVs cheaper to buy than conventional vehicles in most countries by 2025–29, predicting that EVs would make more than half of new car sales worldwide by 2040. 10 Energy executives confident over renewables future: https://www.ft.com/content/fbbc05b0-9c75-11e7-8cd4-932067fbf946 and cf Nissan’s recent prediction of 2025 cost parity: https://www.ft.com/content/7bbd9a9a-1326-11e8-940e-08320fc2a277

Consumers are also attracted by the comparative cheapness of EVs to run and maintain: while the price of diesel and petrol continue to increase, the cost of charging an electric car is negligible by comparison; EVs contain many fewer moving parts than combustion-engine vehicles.

Media attention
In terms of technology, the following were key milestones in the increase of public interest in EVs 11
Timeline: History of the Electric Car :

Spurred by Tesla’s first announcement, other automakers have begun rolling out their own EV models and it is reported that today there are now 23 plug-in electric and 36 hybrid models available. In 2017, many of the world’s largest automakers (including VW, Volvo, Toyota, General Motors, Renault-Nissan and Ford) announced ambitious targets for investment in and sale of electric models. Amongst these, Volvo, announced that every new car in its range would have an electric power train available from 2019.

Climate change is also ever-present in the headlines.

While deployment of EVs could alleviate a number of environmental concerns, mass uptake and market saturation will bring with it its own set of challenges. Cost is also a significant issue.

EVs are heavily subsidised in many countries and whilst these subsidies are crucial to the success of a mass EV rollout they may not be liable in the long-term. The Bloomberg New Energy Finance report forecasts that EVs will become price competitive without reliance on subsidies by 2025.

Range anxiety is one of consumers’ key fears when considering switching to an EV. Charging infrastructure will need to keep pace with the growing number of EVs. Businesses across electricity markets will need to take into account the impact of the additional capacity required from each country’s grid. A rapid increase in demand for electricity from the grid is not a foregone conclusion; it is possible that demand from the grid could decrease as businesses and domestic consumers forge their own charging solutions, whether by means of embedded generation or energy storage.

Batteries have been a significant obstacle in the wider deployment of EVs to date and represent a large proportion of their cost. Battery characteristics including energy density, longevity and charge time impact greatly on the range and performance of EVs. Manufacturers have made significant improvements in these areas, but there is still a way to go to achieve value parity with vehicles with combustion engines, especially for heavier vehicles.

The table below sets out the types of batteries currently used in EVs:

Despite the various problems with current battery technologies, automakers have largely, so far, eschewed hydrogen fuel cells. Compared to batteries, fuel cells would have the benefits of being smaller, lighter and instantly rechargeable; but they are currently much further from economic viability than batteries. Instead, new battery types are in development, with both “solid state” and “lithium air” batteries promising further gains in the crucial variable of energy density.

As previously indicated, the EV market is heavily reliant on policy support in respect of both EVs and charging infrastructure. Policy tools currently in use include purchase subsidies, research, development and deployment measures, fuel economy standards, mandates for automakers to sell a set portion of zero-emission vehicles, and access restrictions. It is thought that policy support will remain indispensable, at least in the medium term; however, as EVs become more cost competitive and economics takes the driving-seat, policy adjustments may be required.

Cohesive regulatory frameworks for EVs are not yet well-established. To prepare for the universal electrification of roads, there is likely to be a need for national legislation on a broad range of issues, including vehicle licensing and taxation, vehicle and charging standards and the smart management of grid demand.

The increase in deployment of EVs creates a wealth of opportunities for investors, automotive manufacturers, electricity generators, supply chains, network operators, energy suppliers, consumers, infrastructure owners and developers, real estate developers and other electricity and automotive sector participants. In fact, the market potential is drawing in participants from other sectors too, including UK technology company Dyson, which has recently announced its £2 billion project to develop and build EVs from scratch, which it claims will bring more inventive designs to the market. 12
Dyson bets on electric cars to shake up industry This is a truly exiting space driving innovation.

The CMS Energy group is passionate about developments that impact the EV industry. We strive to constantly be on top of R&D, engage in constructive dialogue and help our clients manage the challenges and opportunities brought by change. This Expert Guide is our approach to help our clients, whether they are battery or vehicle manufacturers, EV infrastructure providers, network or supply businesses, get acquainted with EV developments across the world. We started with a chapter on developments in the UK and continue to update this guide monthly with chapters from other jurisdictions across Europe, Asia, the Middle East and Latin America.

How we can help

Please contact your CMS contact in the relevant jurisdiction if you wish to discuss the impact of these changes for your business further or for more general enquiries please contact us.