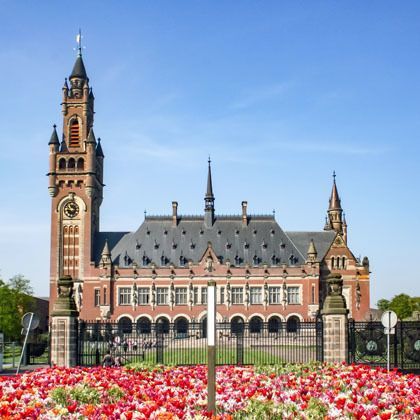 The Public International Law Group has more than 30 years’ experience advising sovereign States and their emanations, international organisations and commercial entities on disputes before the domestic courts and international courts and tribunals, as well as advising on non-contentious matters.

Our team supports clients on a broad range of public international law issues, including privileges and immunities, enforcement, obtaining evidence for use in overseas proceedings, expropriation, the law of the sea, treaty law, State responsibility, international institutional law and the application of EU and UK sanctions rules.

We also regularly advise on Investor-State arbitrations, with CMS specialists from across our network of global offices pooling their skills and expertise within the CMS Investment Arbitration Task Force.

.
In­ter­na­tion­al Dis­putes Di­gest - Winter Edi­tion 2020
Wel­come to the winter edi­tion of the CMS In­ter­na­tion­al Dis­putes Di­gest, the bi­an­nu­al pub­lic­a­tion of CMS’ Dis­pute Res­ol­u­tion prac­tice fea­tur­ing ana­lys­is and com­ment­ary on the ma­jor trends shap­ing the...
Publication
Is the sun set­ting on the En­ergy Charter Treaty? An up­date on the mod­ern­isa­tion...
On 2 Decem­ber 2020, the European Com­mis­sion (the “Com­mis­sion”) in­dic­ated that if “core EU ob­ject­ives” are not met as part of the on­go­ing ne­go­ti­ations to mod­ern­ise the En­ergy Charter Treaty (the...
Law-Now Energy & Climate Change
Load more articles
Close