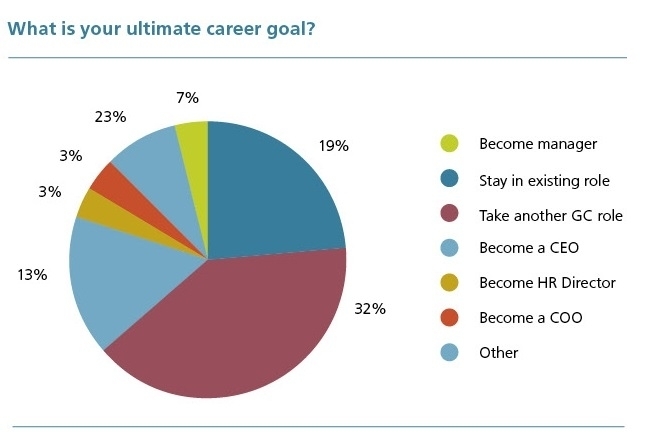 We asked GCs in Latin America about their ultimate career goals. There are some clear divisions in the GC world, with a majority aiming to pursue their careers as general counsel, but about a third hoping for different careers. Notably, about one GC in five has ambitions to join the c-suite, with many attracted to the CEO role.

The ‘Other’ category here includes a variety of ambitions, from becoming a VP through setting up an independent practice to taking a position outside the legal department for development purposes.

One GC noted an ambition to “create a small legal practice to act as ‘outside’ in-house counsel for small companies.” This was the only respondent to tie their ambition to the changing structure of the legal market (which may confirm our finding, above, that most GCs don’t see themselves as being very innovative).

Several GCs want to achieve VP status, with a few aiming higher, for a seat on the board. In most cases they wish to remain as GCs, although they have been included under ‘Other’ in our chart. Altogether, about two-thirds of those we surveyed plan to spend the rest of their careers as GCs.

It is interesting that these figures are similar to those from our most recent survey of GCs elsewhere, which was in Singapore, as well as the last survey we conducted in the UK. Does this suggest the evolution of a pattern across the international in-house community, where roughly one GC in three sees the role as a step to a career change?

If one-third of all GCs wishes to move on to doing something else, rather than remaining a GC until retirement, it has some implications for the tranche of talented junior lawyers, potentially giving them more room to grow. And it may mean that what one GC described as the traditional Latin American culture of “you’re born a lawyer, you die a lawyer” is changing.

It also suggests that the GCs who wish to move into non-legal roles should be focusing as much as they can on personal development. We know from our discussions with GCs around the world that those who wish, for example, to become CEOs are usually aware that their new role will require a different combination of skills from that of the average in-house legal leader. And it is still the case that – even in the US, where there has historically been more career mobility for senior in-house lawyers – relatively very few GCs actually achieve the top commercial roles within their businesses. But with issues such as ethics and risk management moving centre-stage for GCs, the gap that GCs have to bridge to reach the c-suite seems to be narrowing – and may narrow even more if a GC’s status as a business leader and influencer increases.

The most popular – which we’ve focused on in this report and its predecessors – is for those who want to be ‘first-rate’ GCs.

A narrower path – but still one that attracts nearly one-fifth of GCs – is for those with their eyes on the c-suite. Our GC reports, including this one, are not principally aimed at this group, but many of the topics we discuss are highly relevant to them. Ultimately these GCs aim to become so organisationally influential, and possess skills so far developed from those of a typical GC, that they look more like a CEO or COO than a practising lawyer.

The smallest cohort of GCs believe their future lies elsewhere. For them, the GC role is a springboard to a variety of opportunities, some of which may draw on skills honed in an in-house legal department. These skills may include many of the marketable skills that GCs increasingly find themselves obliged to acquire (and which are also useful for those hoping to reach the c-suite), such as management expertise and a greater facility with numbers than the average lawyer.

All three of these paths contain obstacles. For example, there are only limited opportunities for GC-level movement between companies, and many senior roles are never advertised.

Reputation and credibility in the marketplace, and the networking that goes with them, are likely to be necessary if a GC wishes to be considered as widely as possible. The idea of ‘personal brand’ is one that GCs need to take seriously in this context. GCs may struggle to find other roles if their existing role is narrow. The more senior the prospective position, the greater the likelihood that significant industry / sector experience will be required, although barriers to entry are clearly higher for some sectors than others.

The same may be true for GCs seeking to move to the c-suite. Senior executives do move between sectors, obviously, but such moves can be hard to make, and will be even harder for a GC seeking to make the shift into ‘non-legal’ management. Very few GCs becoming executives are likely to find their first management role in a sector other than the one where they have most recently been a GC.

However, GCs who would like to move into other roles – whether in the c-suite or elsewhere – should bear in mind that the structure of the corporate world is not set in stone. Forty years ago, for example, no-one had heard of a Chief Information Officer.

The trends of our time – such as the increasing centrality of data in all businesses, the continuing growth of compliance issues, cyber threats, sustainability and environmental concerns – will see companies reshape some of their management positions and create other innovative ones. A GC’s training and experience may position them well to take on some of the new roles that major companies will develop over the coming years. The enterprising GC, fortunate enough to be in the right place at the right time, may even be able to take the lead in creating such a role for themselves. 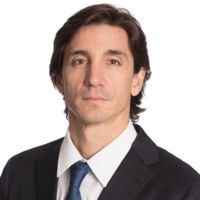 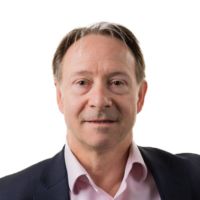